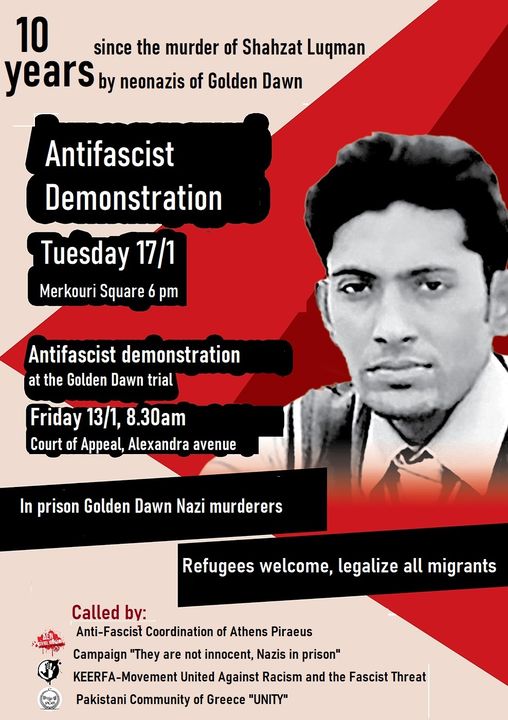 KEERFA-Movement United Against Racism and the Fascist Threat
Antifascist demonstration, Tuesday 17/1, Merkouri Square 6 pm
Antifascist demonstration at the Golden Dawn trial, Friday 13/1, 8.30am, Court of Appeal, Alexandra avenue
In prison Golden Dawn Nazi murderers, Refugees welcome, legalize all migrants
On January 17, 2013, it will be ten years since the brutal murder of the migrant worker Shahzat Luqman in Petralona, with seven stab wounds by nazis of Golden Dawn Liakopoulos and Stergiopoulos. The fascists chased him with a motorcycle while he was commuting to work by bicycle from his home in Peristeri to the laiki market in Petralona. Eight months later, the nazis of Golden Dawn murdered Pavlos Fyssa in Keratsini. The anti-fascist outburst of anger put an end to Golden Dawn’s immunity.
The government of Samaras and Venizelos had paved the way for Golden Dawn to enter the Parliament in 2012, with ELAS's racist sweep operations against immigrants, ELAS's collaboration with the Nazis and the cover-up of attacks and pogroms of the assault battalions in the neighborhoods.
The jailing of the killers of Shahjat Luqman, with the first recognition of a racist motive, was a strong foreshadowing of the condemnation of the Golden Dawn as a criminal organization in October 2020. The anti-fascist movement crushed the fascists, expelled the assault battalions and offices while the refugee solidarity movement welcomed the persecuted and help to open the doors of the schools for their children.

Ten years later, the ND government, in a crescendo of racism and intolerance, sends the Police to murder the 16-year-old Roma Kostas Fragoulis and the Coast Guard to suffocate refugees by pushing them back into the Evros and the Aegean, ostracizes the refugees in ghetto camps outside the urban fabric with the racist evacuation of Elaionas and the abolition of hospitality in houses of the ESTIA program.
They conjure the Luqman’s in Amygdaleza when they are not exterminating them in the Manolades of wild exploitation. They persecute and criminalize solidarity activists who rescue refugees at sea. Thus they  back the fascists to proceed with attacks again in schools and neighborhoods such as in Thessaloniki, Marousi, N. Heraklion, Kokkinia, Aspropyrgos. The government that legitimized Meloni, Italy's fascist prime minister from the first moment, has given Kasidiaris and Lagos cover to go to the elections again. Pleuris gives a Nazi salute at the Golden Dawn trial at the Court of Appeal. They are trying to get on the streets with the assault batallions again by pretending to be  a"political parties".
We will not let them step on even an inch of land! Honoring the memory of Shahzat Luqman we fight for papers and equal rights for migrant workers, for asylum and shelter for refugees.
We call for an anti-fascist mobilization on Friday 13/1 at 8.30am at the Court of Appeal, L.Alexandras, on the day of Dimitra Zorzou's testimony. She happened to be an eyewitness as a bystander to the murder of Pavlos Fyssa and decided to speak, not to remain silent, but to stand against the monster, next to Magda Fyssa. We call on the unions, student associations, collectives in the neighborhoods to give a massive presence to the rally on Tuesday, January 17, on the 10th anniversary of Shahzat Luqman's murder, with a gathering in Merkouri Square and a march to the place of murder.
Antifascist Coordination of Athens Piraeus
Campaign "They are not innocent, Nazis in prison"
KEERFA-Movement United Against Racism and the Fascist Threat
Pakistani Community of Greece "UNITY"
5/1/2023 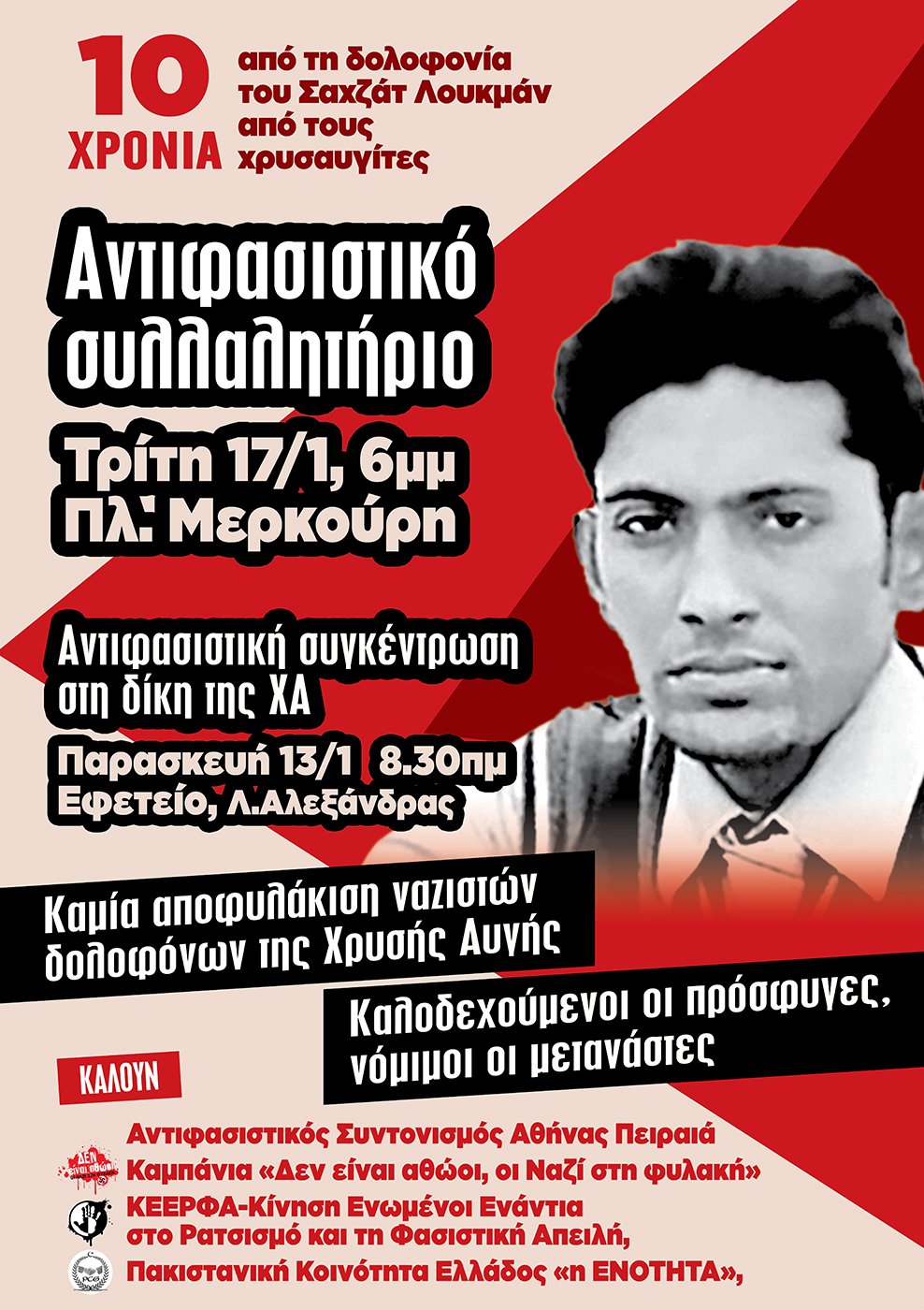 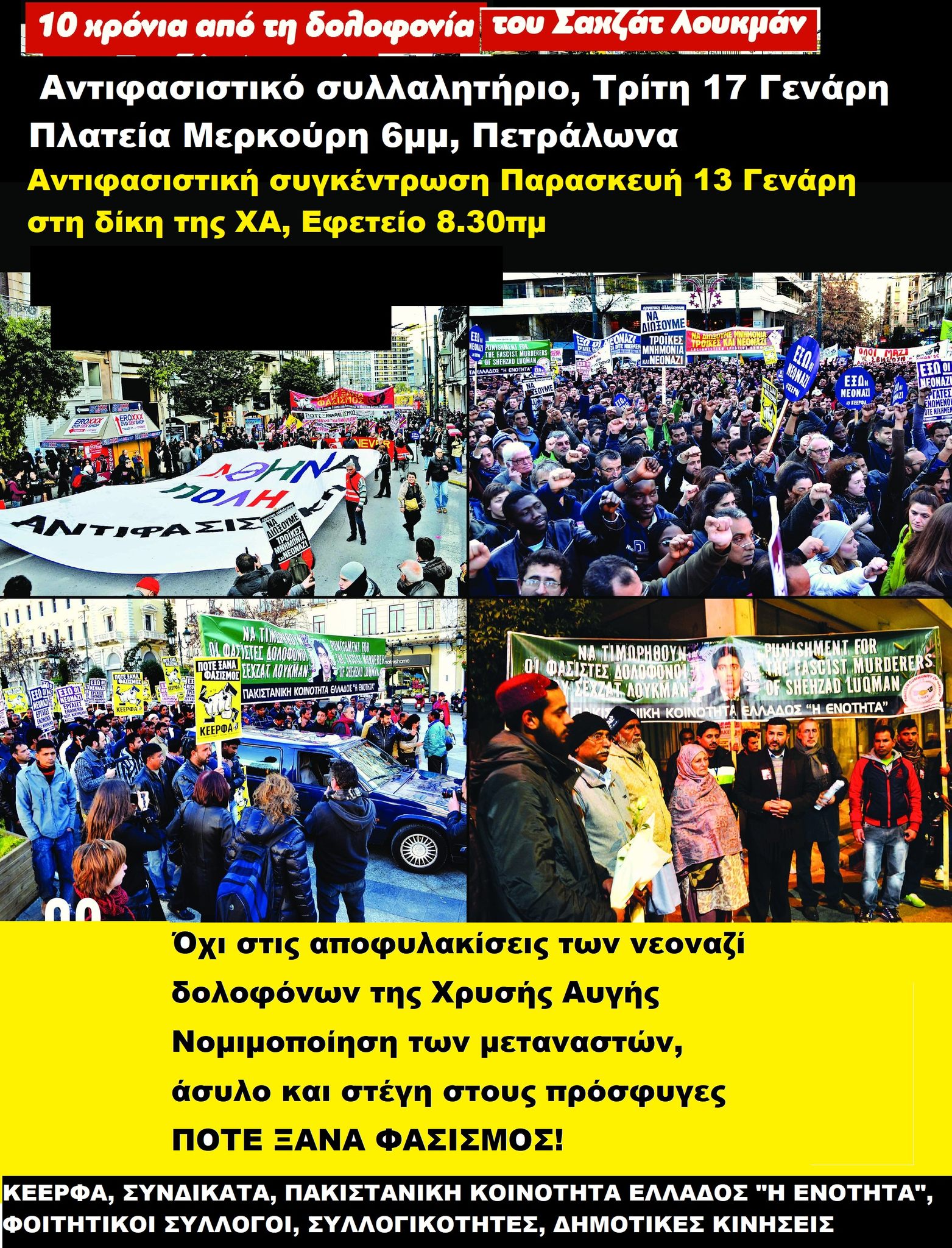 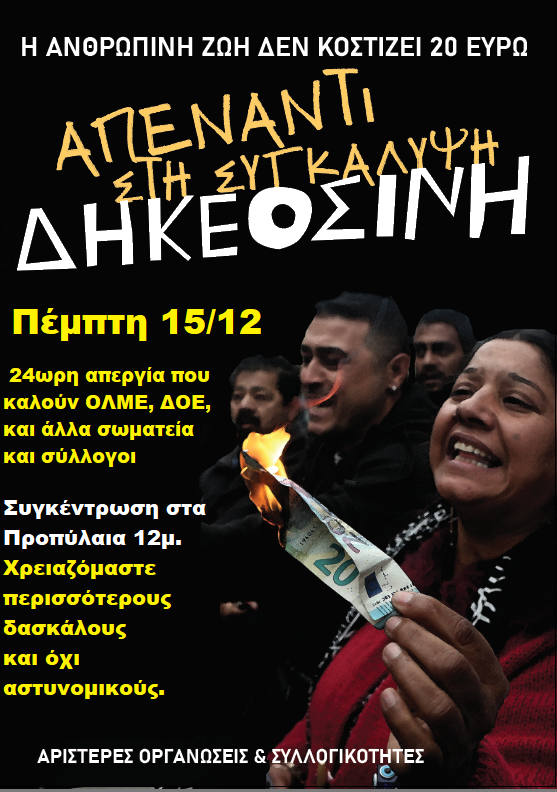 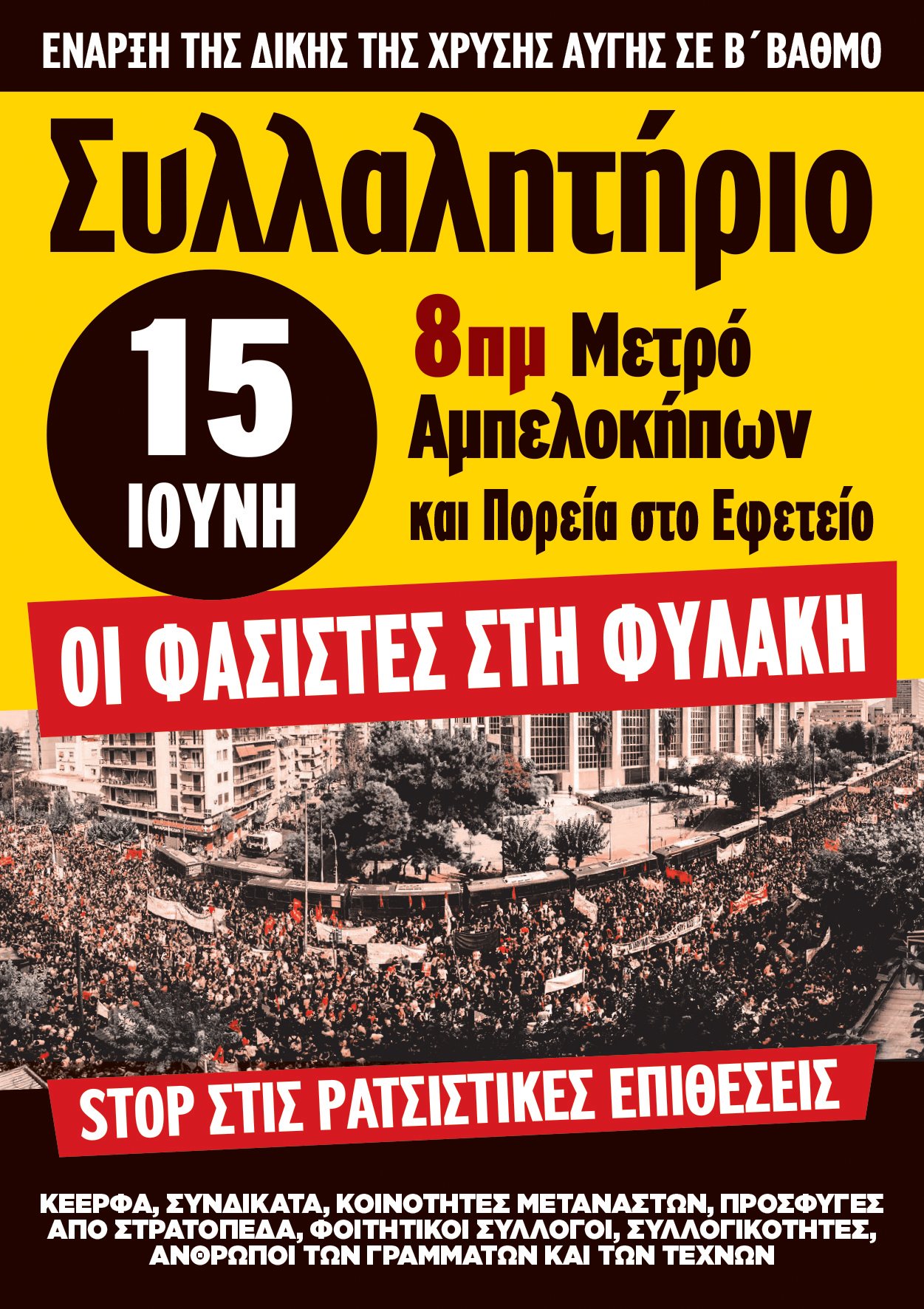