The cold-blooded murder of 34 year old artist Pavlos Fyssas in Keratsini by thugs of the Golden Dawn in a Nazi ambush has sent shockwaves through millions of people, not only in Greece but around the whole world.

Eight months ago, it was a Pakistani worker Shehzad Lukman who lost his life, stabbed by Golden Dawn members in Petralona. Now the bell tolls for everyone: the paramilitary squads of the neo-Nazis, with black shirts and swastika variants, are now launching murderous attacks against leftists, anarchists, communists, trade unionists, gays and anti-fascists. At the same time, the economic disaster that underlies the emergence of fascism is getting deeper. Those who believed in a quick return to normality that would automatically deflate Golden Dawn have been proved wrong. The major challenges are not behind us. They are ahead of us.

The responsibility of the right-wing government of Antonis Samaras, supported by the remnants of the social-democratic PASOK under Evangelos Venizelos, could not be greater. We understand that historical analogies can often be misleading. But the crisis facing the Greek society can be compared to that of the 1930s. Golden Dawn models itself on the national-socialist movement of Hitler. Faced with this threat, the government of Samaras is hardening its right-wing agenda, in the form of authoritarian decrees through the use of executive power. It seems to oscillate between the politics of Engelbert Dollfuss in inter-war Austria and Heinrich Bruning in Weimar Germany. Historically, these policies did not put a barrier to fascism, but paved its road.

Racism in Greece has become official state policy. Thousands of immigrants are rounded in concentration camps for up to 18 months because they lack regular papers. Access to the city centre of Athens, if you are darked-skinned, is dangerous, either due to the Greek police's (ELAS) stop-and-search project with the Orwellian name "Xenios Zeus" (Hospitable Zeus) or due to the fascist attacks by Golden Dawn. At the same time, the Samaras government continues the faithful implementation of the Memoranda of austerity imposed by the Troika and savagely represses any mobilisation of the trade unions and the youth, ie of the only force that can provide a collective alternative to the abyss of the crisis. The government thus undermines the foundations of the freedoms and the democratic rights gained with blood and sacrifice, with the overthrow of the colonels' Junta and the struggles of the transition period that followed.

Those who sign this appeal do not believe that history simply repeats itself. We have seen in practice - in fact we have actively taken part in shaping - the power that can give today a different path against the fascist threat, unlike that of the 1930s. The huge anti-fascist demonstrations against the murder of Pavlos Fyssas did not fall from the sky. They have behind them a persistent and long-running anti-fascist and anti-racist activism, in neighbourhoods, in workplaces, in large mobilisations such as the one of 19 January 2013. It is this movement that controls the streets, not the Nazi storm troops of Golden Dawn. The most promising development in recent months is the emergence of a militant anti-racism with the immigrants themselves as its subject, from the strawberry pickers of Manolada and the rebellious prisoners of Amygdaleza to the second-generation children who struggle for citizenship.

This movement must deepen, spread and coordinate. In order to achieve all that, it must first and foremost be able to discuss its strategy, tactics, initiatives, activities. For this reason, we believe that participation in the anti-fascist meeting organised by KEERFA on 5-6 October exceeds the boundaries of a single organisation. We call on anti-fascists from all over Greece to participate in the nationwide assemblies of 5 October. We are preparing to welcome friends and comrades from around the world at the International meeting of the following day. We propose a pan-european coordination of activity with an international day of action on 22 March 2014 and other actions against fascism and the racist policies of "Fortress Europe".

Living in Athens, Thessaloniki and other Greek cities, we have the "luxury" to hear more clearly than anyone else in Europe the screeches of a system that in its biggest crisis threatens to regenerate the monsters of the 20th century. We are waiting for you in Athens, on 5-6 October to ensure that in the greatest battle of our times, it won't be despair that wins, but hope.

1. Petros Constantinou (coordinator of KEERFA, councillor in Athens municipality. Prosecuted for his anti-racist and anti-fascist activity on charges of "disseminating false news").
2. Javied Aslam (leader of the Pakistani Community in Greece. Persecuted by the Greek state in collaboration with the Musharraf dictatorship on false charges for which he was acquitted ) .
3. Spyros Marketos (historian, Aristotle University of Thessaloniki. Charged with "human trafficking", because he accompanied a Somali refugee at the airport of Thessaloniki).
4. Babis Kouroundis (lawyer, member of the Board of the Bar Association of Thessaloniki. Charged alongside Spyros Marketos, because he accompanied a Somali refugee at the airport of Thessaloniki).
5. Kostas Papadakis (lawyer, member of KEDDE. He has undertaken a variety of cases defending immigrants, among them that of the immigrant trade-unionist Konstantina Kouneva).
6. Kostas Arvanitis (journalist).
7. Moses Litsis (journalist, member in the Board of Union of Journalists - ESIEA) .
8. Margarita Papamina (primary school teacher, member of KEERFA in Chania. Sued by Golden Dawn for allegedly throwing a leading member into the sea).
9. Eugenia Kouniaki (lawyer. She is active in movement for immigrants and refugees rights and has undertaken cases of murderous fascist attacks, amongst them that of the Golden Dawn member Skordelli in Agios Panteleimonas).
10. Dimitris Livieratos (historian of the workers' movement, Resistance fighter against the Nazis in the 40s).
11. Makis Kavouriaris (academic, took part in the anti-dictatorship movement).
12. Katerina Thoidou (journalist in "Workers' Solidarity", member of KEERFA in Nikea. Sued for "defamation" on the initiative of a salaried lawyer to a member of the Golden Dawn).
13. Takis Zotos (lawyer, member of KEERFA. He has undertaken the prosecution in the case of the murder of the Pakistani worker Shehzad Lukman by Golden Dawn members).
14. Vassilis Kukalani (director of the anti-racist theatrical play "A feast at Nutian's").
15. Thanassis Kampagiannis (lawyer, author of the book "The struggle against racism today") .
16. Georgia Mavragani (director, participates in the Movement Mavili – "Kinisi Mavili").
17. Jemali Miliazim (teacher, member of KEERFA in Xanthi. Victim of a fascist attack during an anti-fascist campaign, of which the perpetrator escapes).
18. Irini Fotelli (employee in the public TV broadcaster ERT).
19. Nazim Mahmoud ( Pakistani worker, member of KEERFA in Peristeri. Victim of a fascist attack, now prosecuted for "bodily injury" and "possession of weapons").
20. Reza Golami (Association of Afghans United in Greece) .
21. George Tsamouris (member of KEERFA in Zografou.Victim of a fascist attack, for which the perpetrators have been convicted).
22. Abdul Shafir (Pakistani immigrant, ex-prisoner in the concentration camp of Amygdaleza).
23. Antonis Alfieris (member of the Anti-Nazi Initiative of Piraeus).
24. Costas Katarahias (doctor, president of the workers' unions of Agios Savvas. He participated on his medical status in actions against the concentration camps and the "blood-donations" of Golden Dawn).
25. Zaneta Lysikatou (student, member of KEERFA in Alexandroupoli. She participated in protests against FRONTEX and the building of the wall in Evros).
26. Christina Lada (primary school teacher. She took active part in the anti-fascist campaign that cancelled the nationwide planned nazi "festival" of Golden Dawn in Kalamata).
27. Thanassis Diavolakis (teacher, councillor in Piraeus municipality. He participates in the antifascist movement in Piraeus).
28. Rania Nenedaki (councillor in Zografou municipality).
29. Dimitris Polychroniadis (primary school teacher, councillor in Maroussi municipality).
30. Panos Garganas (editor of "Workers Solidarity", which has covered extensively the mobilisations of the anti-fascist and anti-racist movement and is being sued by fascists for "defamation").
31. Katina Sifakaki (fighter in the Resistance against the Nazis in the 1940s, antifascist, 97 years old).
32. Maria Styllou (editor of the magazine "Sosialismos apo ta Kato")
33. Yannis Sifakakis (Stop the War Coalition. He was central in the campaign to reveal the abductions of Pakistani immigrants after the London bombing in 2005. His phone was tapped. The case is still to be heard). 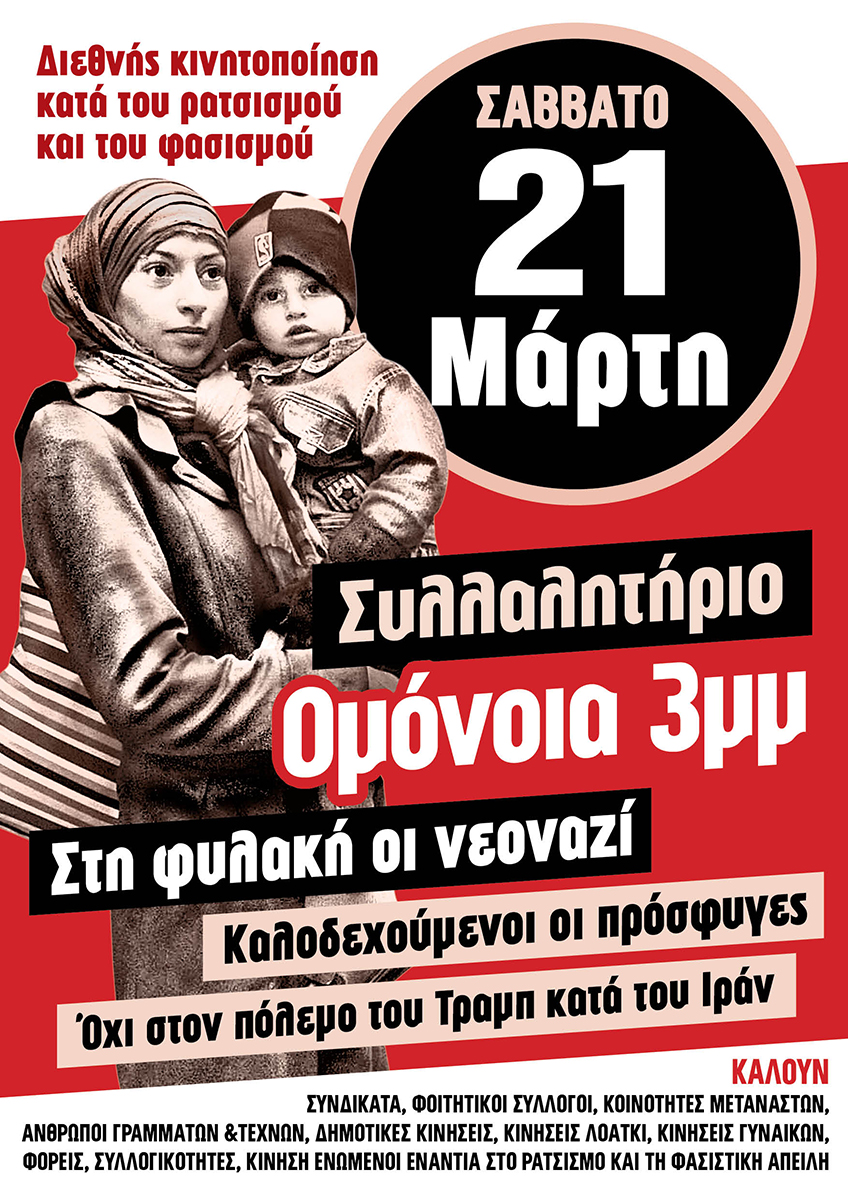 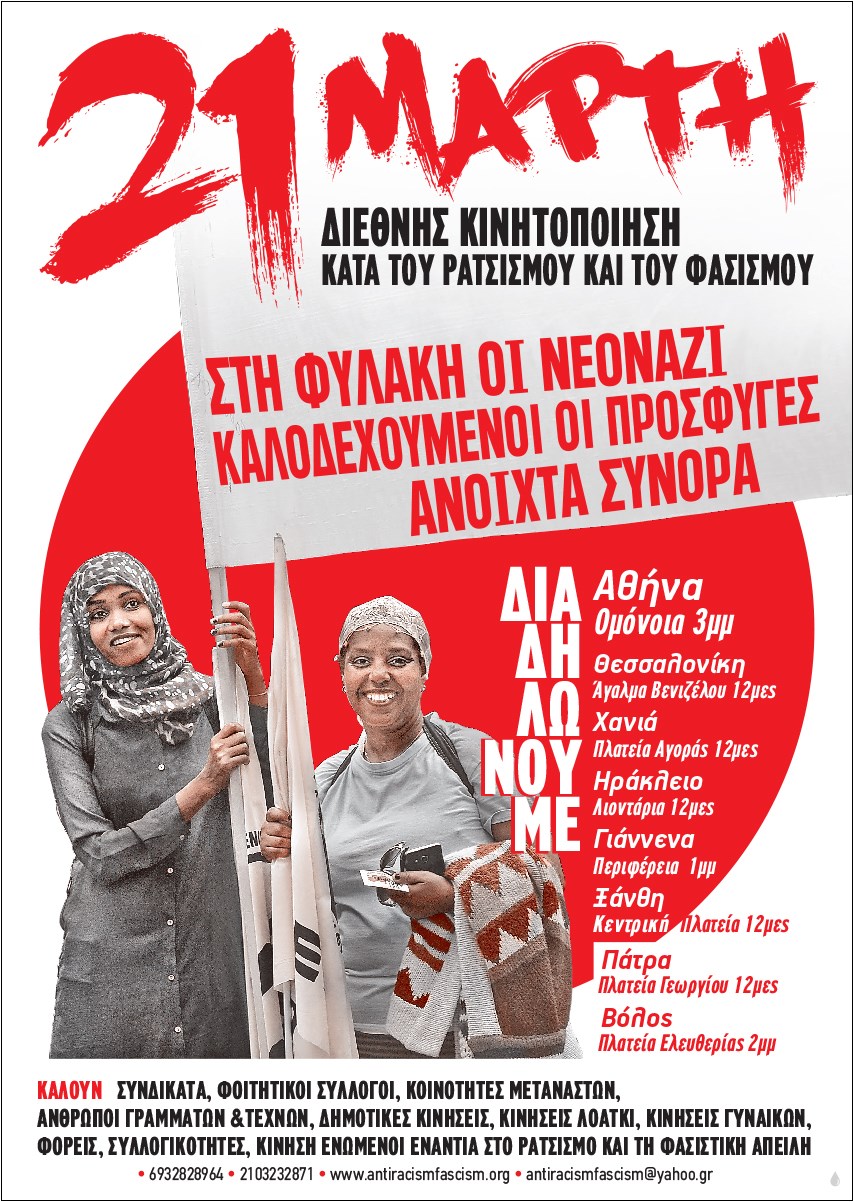 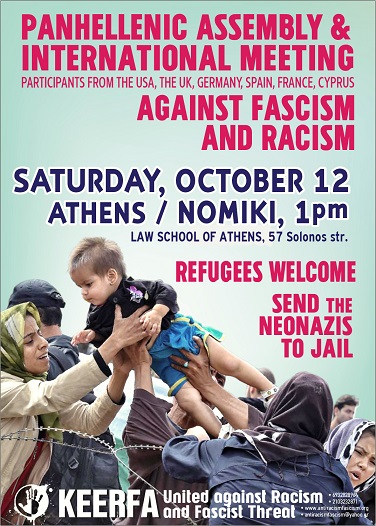 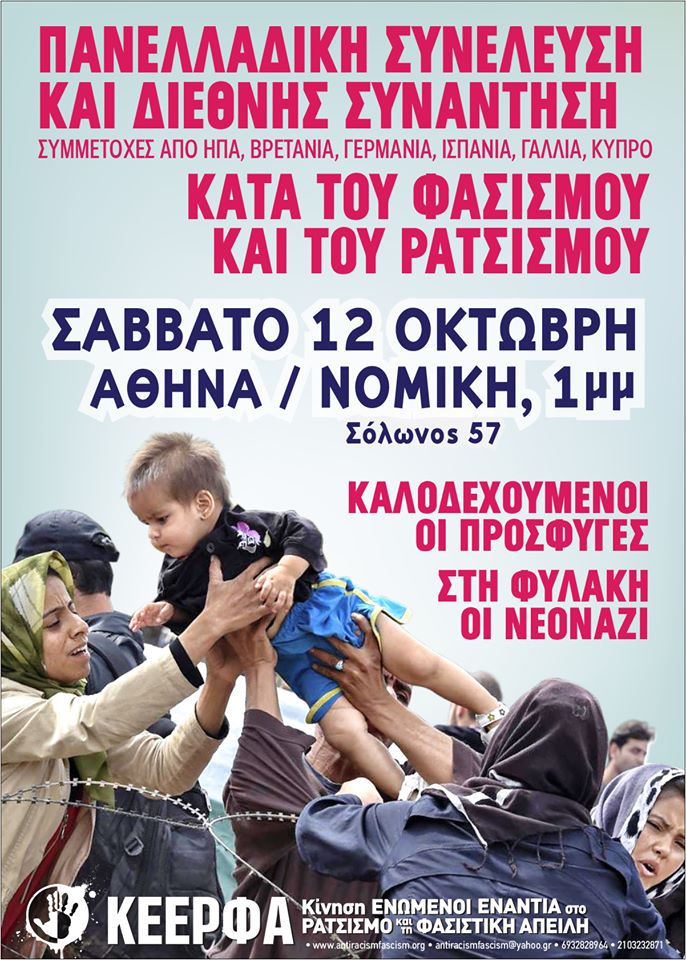