Warning: count(): Parameter must be an array or an object that implements Countable in /home/antirac2018/public_html/components/com_k2/models/item.php on line 763
Print this page
Monday, 16 February 2015 16:17 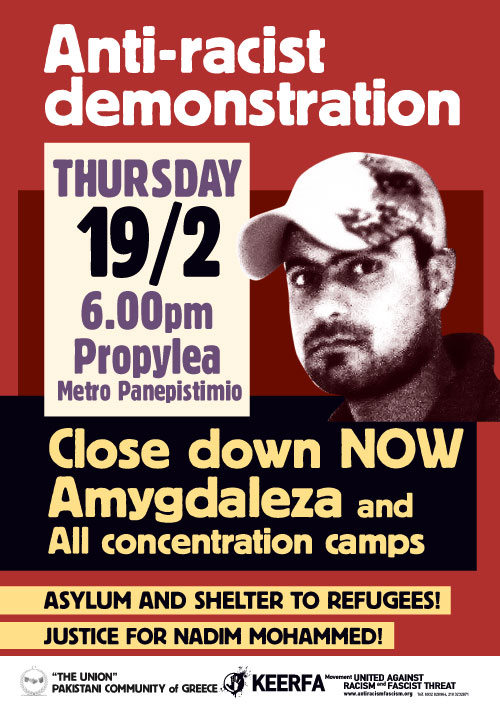 The picture we saw today entering the premises of the Amygdaleza concentration camp for immigrants recalled historical pictures of the sites of exile and torture of thousands of detainees in arid islets as in Makronisos. People impoverished, dowdy, with sandals in the cold - but also full of hope that now the camps must be closed. For this they yelled one word: FREEDOM! FREEDOM!

The container in the wing A1, where Nadim Mohammed left his last breath, testified on the inhumanity of detention of refugees on European soil in the 21st century. One wonders, will those who organized these hellholes be punished? Will light be shed on dozens of complaints that went into the archives concerning deaths, ill-treatment and torture of immigrants? The ones in charge of ELAS (Police) who gave orders to "make their life unbearable" will continue to be immune?

Promises by Mr. G. Panousis, the new associate minister responsible for Citizens’ Protection, that "Amygdaleza will close soon", given one day after the suicide and four after the death of Afghan refugee Sayed Mehdi Achmpari do not reassure us.

The Amygdaleza and all concentration camps ought to have been closed already yesterday. Every day of extending the life of the camps puts lives at risk because the reservoir of despair that has been created because of the lengthy detention feeds actions like the suicide of Nadim Mohammed. The appalling conditions have brought even cases of miliary tuberculosis that are extremely dangerous for the lives of hundreds of prisoners.

We demand the immediate intervention of Prime Minister Alexis Tsipras with an order to the police authorities for the immediate closure of concentration camps and the release of all unjustly detained refugees. We claim asylum, shelter, access to health and education for all.

We call on the left, the student associations, immigrant communities, the anti-racist and anti-fascist movements to give all together and firmly the battle to immediately close the camps, without "yes, although first we need new legislation".
We demand the removal of the old legislation inherited by the racist policies of the former coalition government of ND-PASOK, the end of Xenios Zeus and racist sweep operations, demolishing the fence at Evros and getting rid of FRONTEX. We do not forget that these very days dozens of refugees, women and children drown in the Aegean and all the way to Lampedusa.

From Greece, the anti-racist and anti-fascist movement that is preparing for the international day of action on March 21, sends its own message that it is time to finish with the racism that murders and paves the way for neo-Nazis and fascism. Our struggle is to rip apart the memoranda of poverty and along with them the memoranda of racism, the miserable legacy of Samaras and Venizelos!