Open Meeting to organize the mobilization against refugee evictions and the government’s racist campaign Thursday, June 11, 7pm, at the roof of 47 Aiolou str. 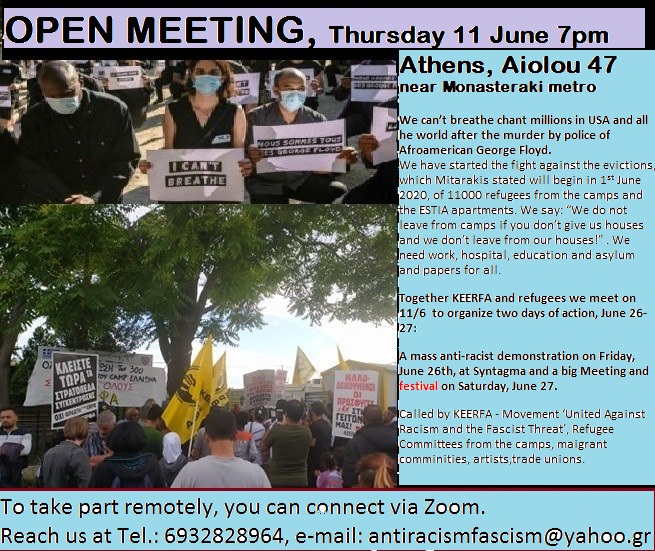 Open Meeting
to organize the mobilization against refugee evictions and the government’s racist campaign
Thursday, June 11, 7pm, at the roof of 47 Aiolou str.

With the inspiration and rage of the US’s uprise against racism, following the murder of George Floyd, we fight against Trump’s friends  in Greece: Mitsotakis and Mitarakis.
We have started the fight against the evictions, which Mitarakis stated will begin in June 2020, of 11000 refugees from the camps and the ESTIA apartments. We will not allow them to move forward with this disgrace, by kicking thousands of families, single women and disabled people out in the streets and parks, and take children away from their schools. Instead of assimilating them in our society, without social and racist prejudice, teaching them Greek, and offering them access to work and housing, Mitarakis is attempting to unfold a refugee extermination plan, building new concentration camps on islands and in the mainland, and throwing refugees out in the streets.
At the same time, he stops the refugees’ allowance from the first month they are granted asylum, while the asylum seekers will only be able to buy products from super markets, instead of getting an allowance.
The refugees are fighting for a house for their family, not for evictions. The solidarity movement demands that the municipalities provide housing for all: refugees, Roma and homeless people.
The government used the CoViD-19 pandemic to spill its poison against the refugees. They held thousands inside closed camps, with no sanitary provision, instead of evacuating the camps and giving houses to everyone. Meanwhile, their access to healthcare is getting even more difficult, with the abolition of the granting of AMKA (Social Security Number).
The government is trying to escalate its racist campaign, with Police “sweeps” of immigrants without papers, the expansion of Evros’ wall, illegal deportations through a parastatal mechanism, with a mock asylum granting process, for which the conditions for asylum qualification have become unreachable.
Now is the time to be heard, for the workers’ movement, the youth, the solidarity to those fleeing wars, hunger, dictatorships and climate change.
KEERFA, along with refugee committees from the camps, is calling the immigrant communities, the workers’ and students’ unions, people of science and art, solidarity movements, women’s and LGBT+ movements, environmental movements and municipal parties to an open meeting, to organize two days of action, June 26-27, featuring an anti-racist demonstration on Friday, June 26, at Syntagma, and a big festival on Saturday, June 27.
Called by KEERFA - Movement ‘United Against Racism and the Fascist Threat’, Refugee Committees from the camps, the Pakistan Community of Greece ‘Unity’, the Cameroon Community of Greece, people of science and art, municipal parties, unions.
To take part remotely, you can connect via Zoom.
Reach us at Tel.: 6932828964, e-mail: This email address is being protected from spambots. You need JavaScript enabled to view it.