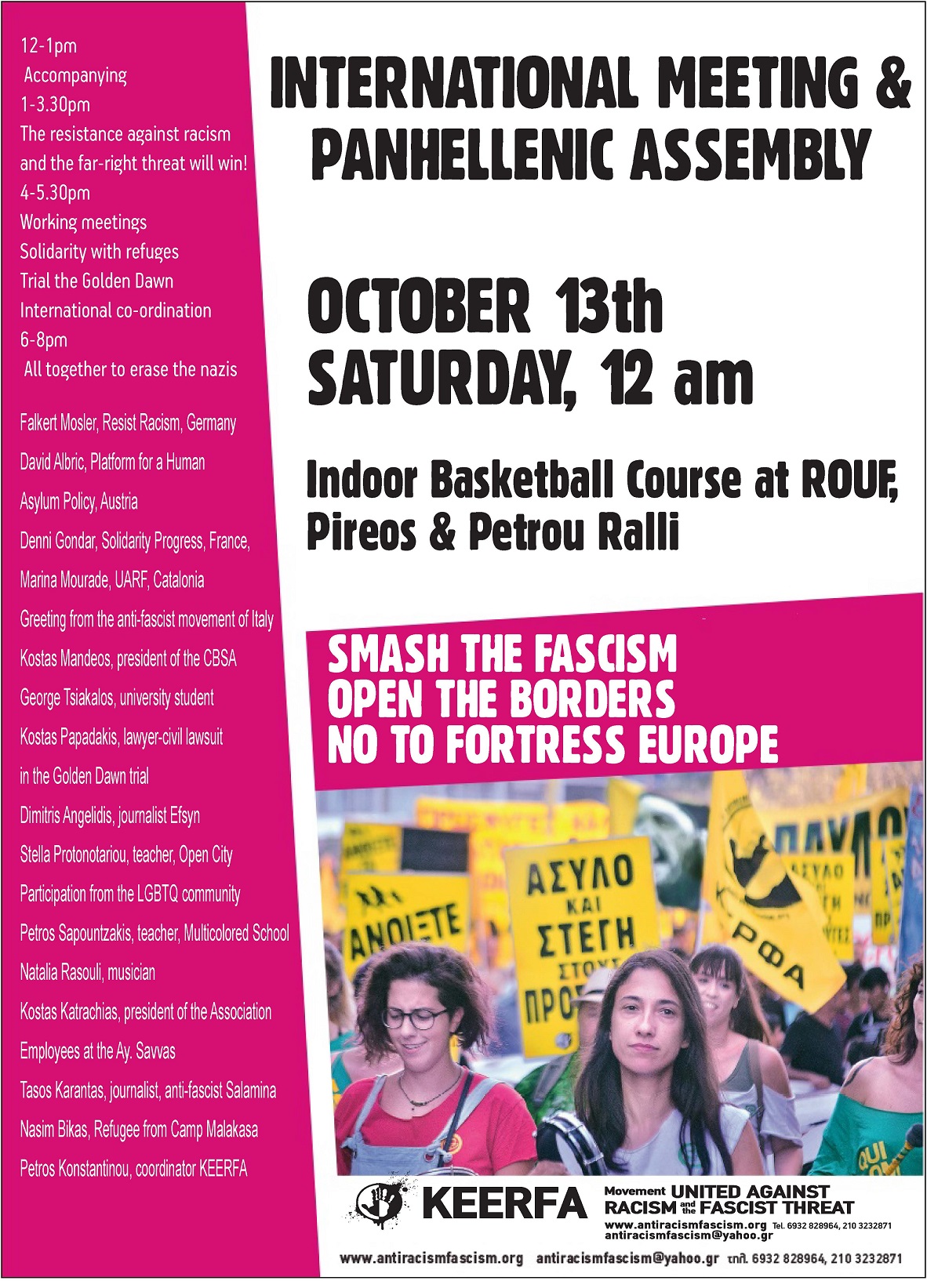 WE CRUSH FASCISM
OPEN THE BORDERS
NO TO THE EU-FORTRESS

Thousands rise in Germany, Italy, Austria, Britain not to let fascism pass and for the winning of solidarity with the refugees against the Fortress-Europe.
Together with this new hopeful movement, the anti-fascist movement in Greece showed the power that can crush the fascists. On September 15 and 18, thousands flooded the streets at the five years anniversary since the assassination of Pavlos Fissas, at the same time responding to the new EU racist agreements that adopt the Trump agenda but also claiming that the completion of the Golden Dawn trial will mean that neo-Nazi assassins will go to jail. Working people, students, migrants, refugees from the camps, artists, women and LGBTQI, along with KEERFA gave a potent presence in Syntagma square on 15 September. Now we have to discuss how we organize the follow-up.

The dashing entrance of the anti-fascist and anti-racist movement in Europe this summer over the challenges of neo-Nazis and the racist policies of governments has shown that there exists the power that can block their way so that we do not return to the nightmares of the prevalence of Nazism and fascism of the interwar era.
In Germany, 65,000 flooded the streets of Chemnitz to drive away the neo-Nazis. Together with the ones in Hamburg, Berlin and Frankfurt, thousands protest against Seehofer, Merkel's interior minister, who closes the border to refugees with outposts and detention centers.
In London, more than a million protesters declared Trump unwelcome, and undesirable racism, Islamophobia, sexism; then continued with a anti-fascist movement against fascists masked as "Democratic football fans", in reality fans of the fascist Robinson, who perform racist attacks.
In Austria, anti-fascists besieged EU ministers' meetings against closed borders, demanding that solidarity bridges be built - rather than walls.
In Italy, the far-right Interior Minister Salvini, who prevents the refugees' ships that are salvaged in the Mediterranean from docking in Italian ports, is being besieged by anti-racist protesters in one city after another. Together they are preparing a nationwide anti-fascist demonstration in Rome.

The International Meeting and the Pan-Hellenic Assembly on 13 October are a way to organize the battles together, coordinate them across Europe and scale them up. Golden Dawn, despite the isolation imposed by the trial for three and a half years, attempts with the mask of “Warrior for Macedonia” to escape the power of the movement. We have to continue the campaign for the trial-conviction, but also to prevent the neo-Nazis from engaging in attacks on our neighborhoods.
At the same time, we have to struggle to put an end to the disgrace of Moria at Lesvos and all the miserable EU agreements that turn the Mediterranean into a wet grave for thousands of refugees. We are struggling to open the borders, to bring all refugees to cities, to provide them with asylum, shelter, education and health.

We call on unions, student associations, grassroots movements, immigrant and refugee communities, movements of women, LGTBQI, disabled, on people of the arts and letters to support the International Meeting and the Pan-Hellenic Assembly.

Together we have the strength to win.