17/3 INTERNATIONAL DAY AGAINST RACISM AND FASCISM We Demonstrate! IN GREECE AND ALL OVER THE PLANET ATHENS Omonia 3pm Featured 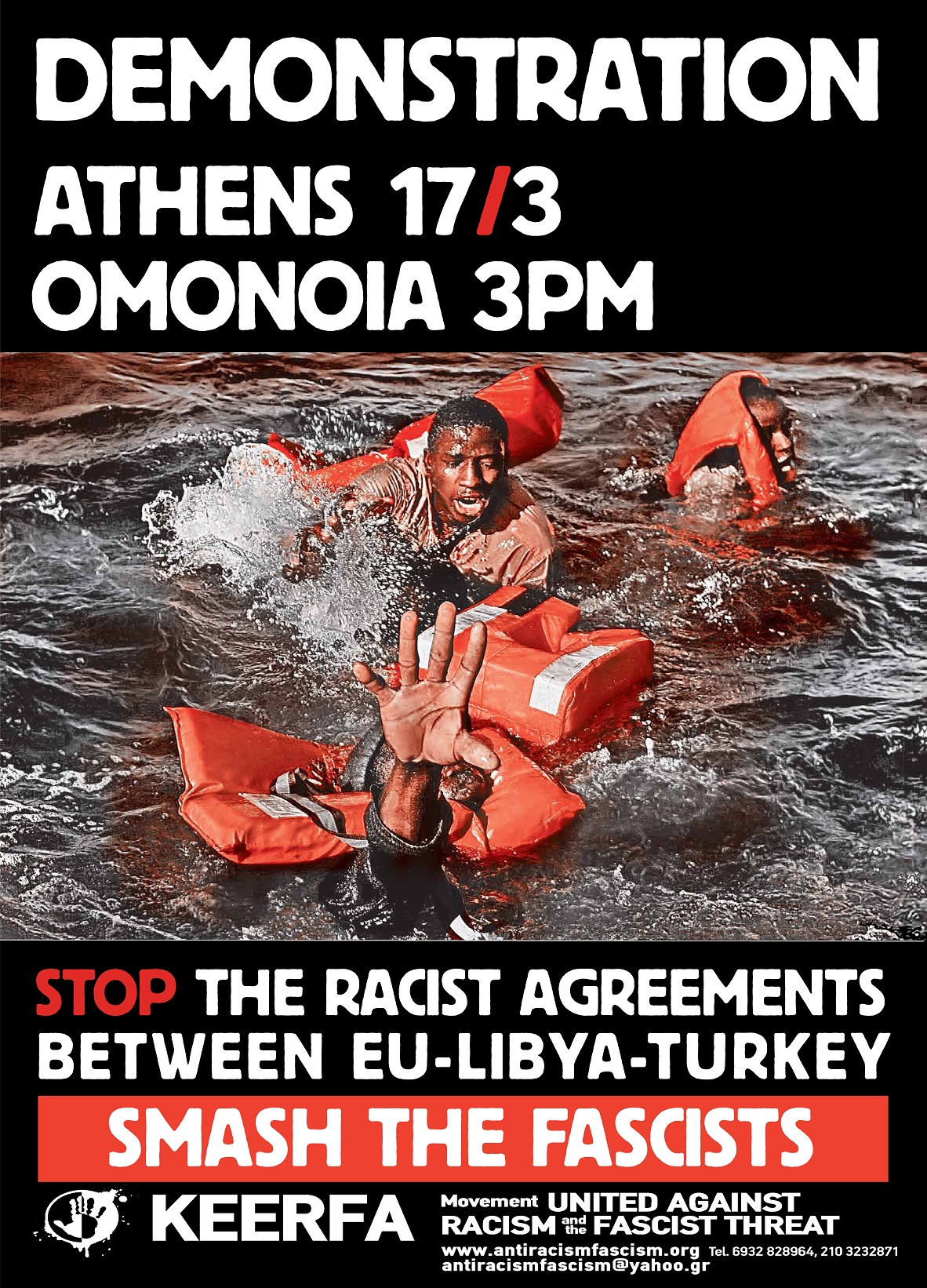 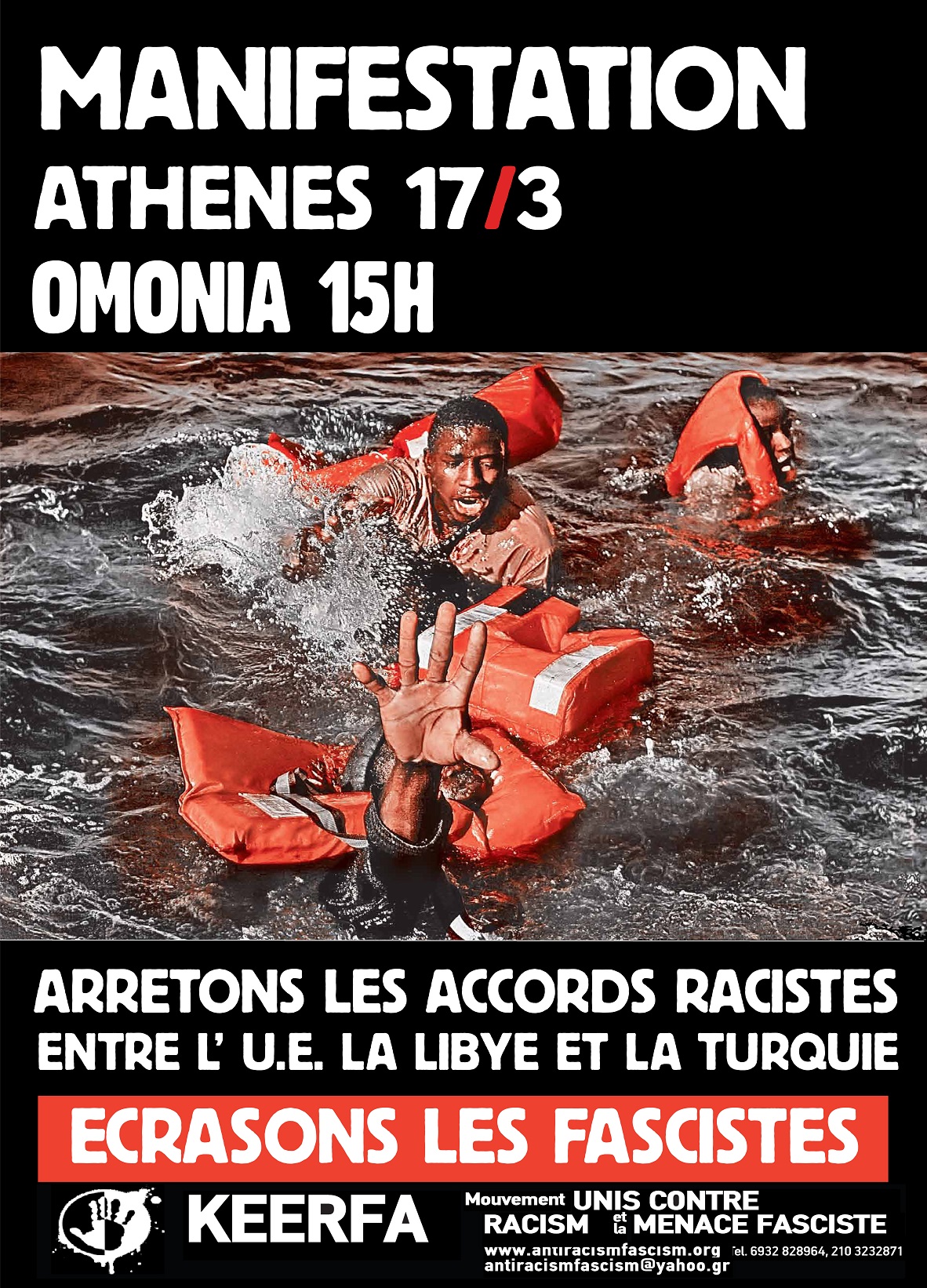 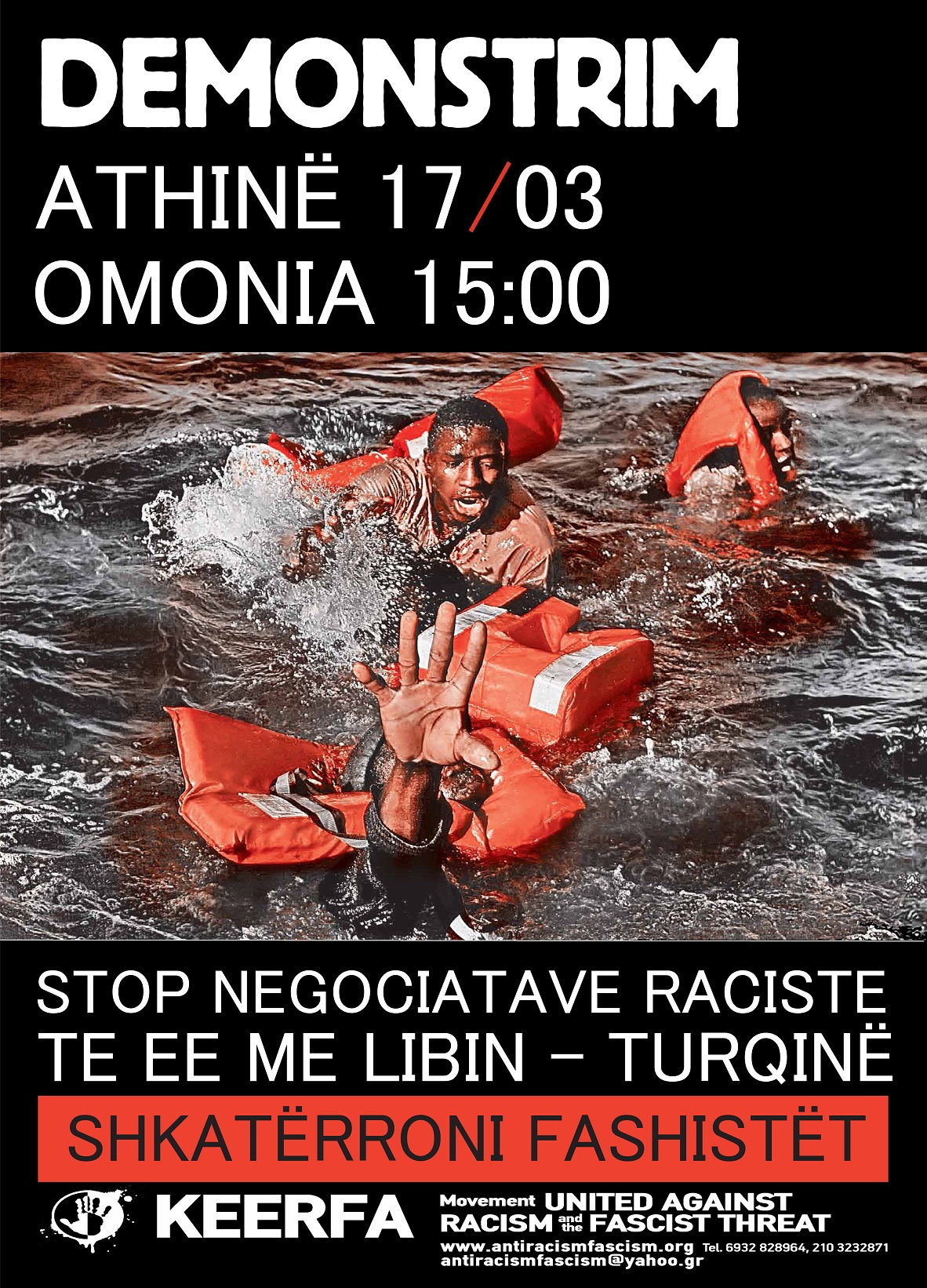 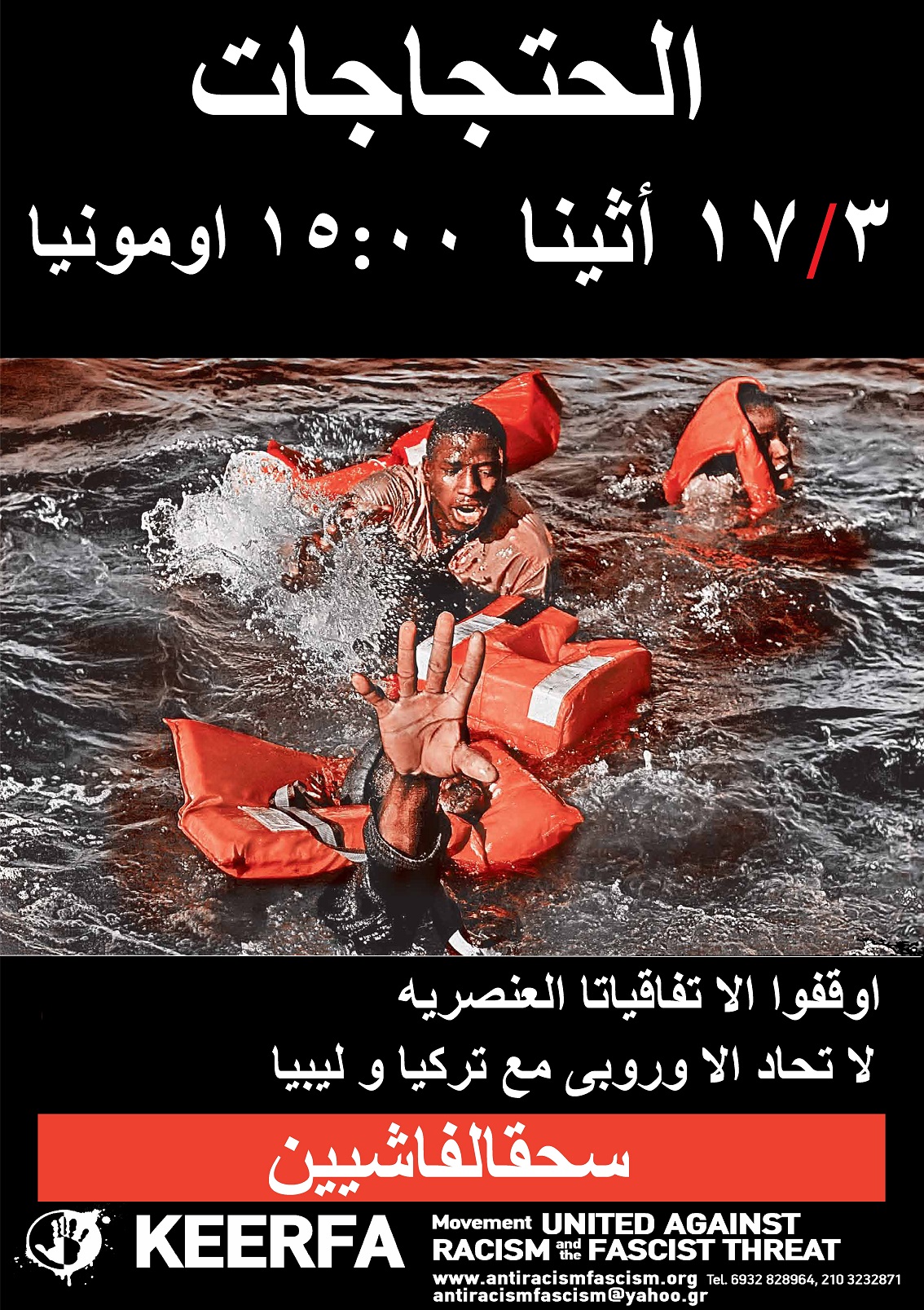 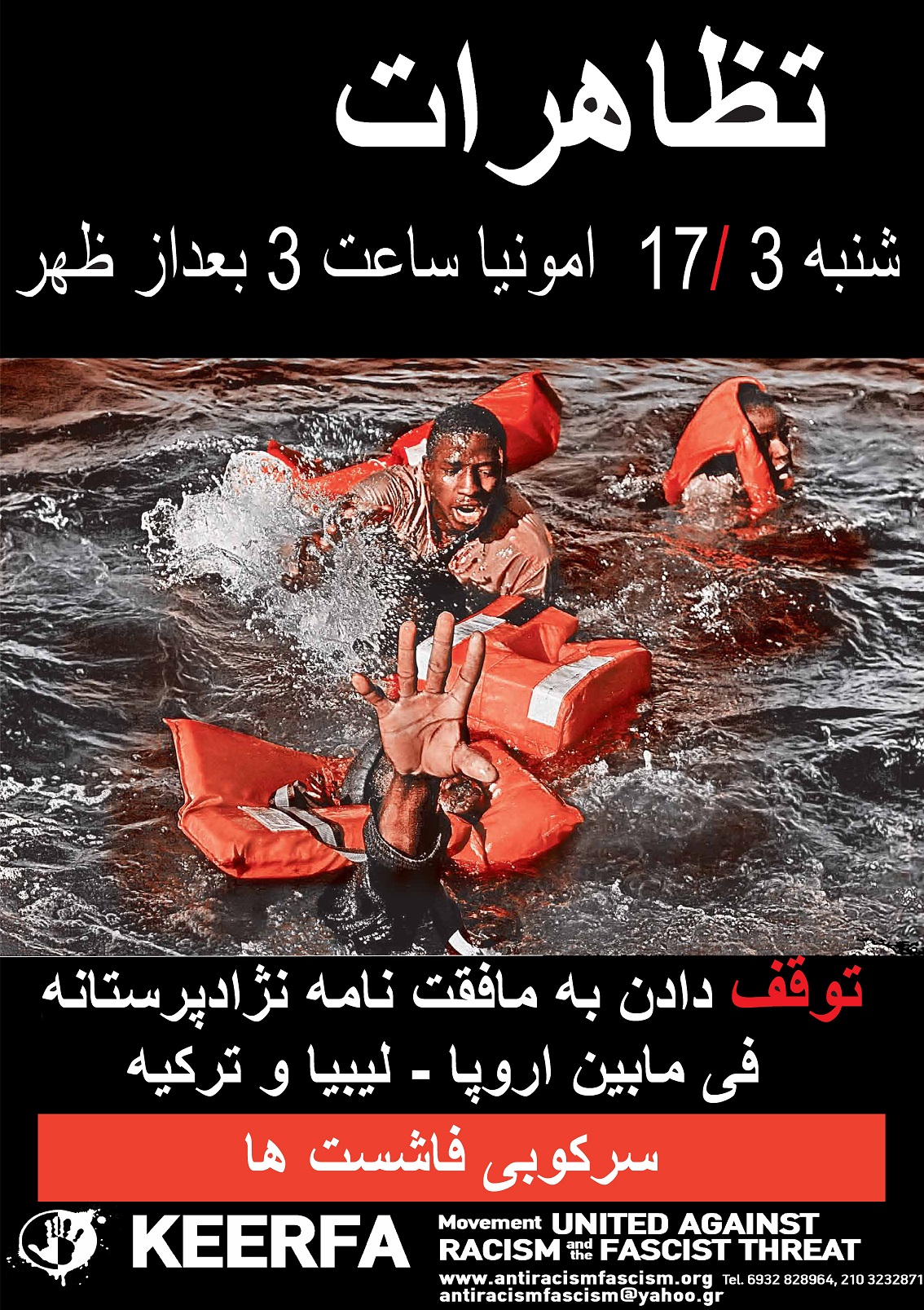 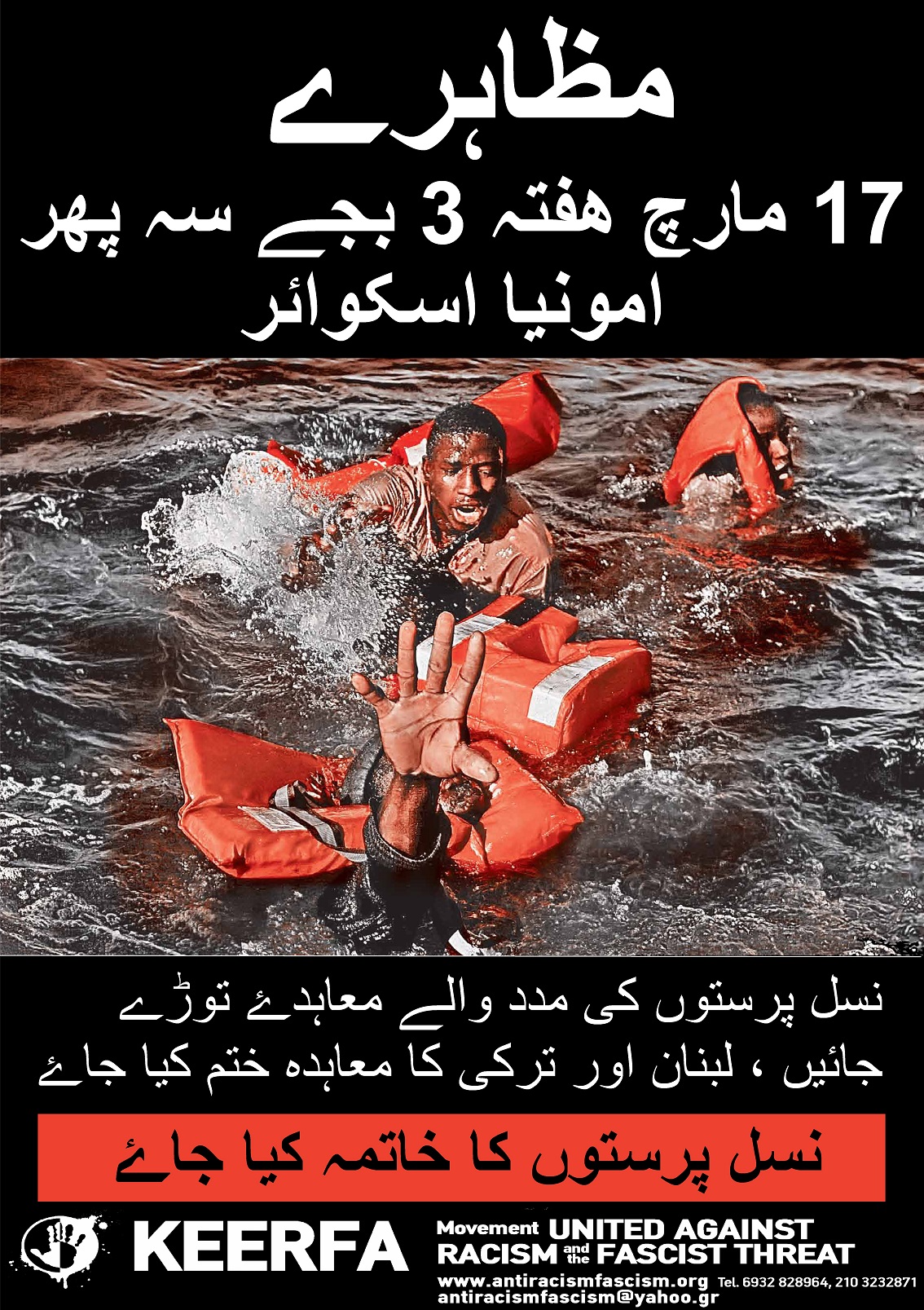 17/3 INTERNATIONAL DAY AGAINST RACISM AND FASCISM
We Demonstrate!
IN GREECE AND ALL OVER THE PLANET
ATHENS Omonia 3pm
• CLOSE DOWN THE OFFICES OF GOLDEN DAWN
• CONVICT AND IMPRISON THE MURDERERS
• REPEAL THE EU-TURKEY-LIBYA RACIST AGREEMENTS
• CLOSE DOWN THE CONCENTRATION CAMPS
• OPEN THE BORDERS, REFUGEES ARE WELCOME
Rise-up across Europe to block the ascent of the fascist threat and racism!
On March 17, workers and youth, refugees and immigrants, are preparing to flood the streets in Britain, Austria, France, Germany, Poland, Cyprus, Turkey, Denmark, the Netherlands to send the message of resistance against the Fortress-Europe that brought fascists to the fore.
We too, go ahead with all of them! We put a barrier to the ascent of the fascists, forcing the Golden Dawn at the trial to apologize for their murders, demanding that their officesin our neighborhoods -bases for their raids- be closed, building solidarity with refugees and immigrants to break their isolation in the islands, and to welcome them into open cities.
The ascent of the Far-Right and fascists in Europe was born out of the racist policies of governments. This is how the Far Right has come to participate in the Austrian government, Lepen to pass into the second round of presidential elections in France and the racist Alternative For Germany to enter the parliament (Bundestag).
EU governments have closed the borders via the agreements with Turkey and Libya and have opened concentration camps from the Aegean Islands to the deserts of Libya, where even slave markets of immigrants have sprung up! More than three thousand drowned in the icy waters of the Mediterranean in 2017. The Muslims were turned into scapegoats by governments in order to break up resistance to policies of wild austerity and to support brutal imperialist interventions in Asia, Middle East, Africa. Tramp in the United States gave impetus to the Far Right by playing openly the card of Islamophobia and sexism.
Still, the resistance continues! We can stop the fascists and overturn the racist EU-Fortress policies. The Golden Dawn does not manage to take-off in Greece, despite the frustration caused by the government’s compromises with the Troikans and Trump, just because a massive united anti-fascist movement is blocking this road. A whole lot of people are indignant with the Mouzalas and government politicies, but it is turning its back on the New Democracy party, the Far Right and the Mayors, who are blatantly supporting them,aiming to persecute the refugees, to effect mass expulsions to Erdogan’s Turkey.
In 2017, thousands took part in massive rallies on March 18th and then in a massive march on 9 April to close the Neo-Nazi offices –bases for raid-after the assaultto assassinate student Alexis Lazaris. Four years since the assassination of PavlosFyssas, on September 16th, thousands marched again to the neo-Nazi headquarters along with hundreds of immigrants,angry for the massacres of Rohingyapeople in Myanmar.
We call on workers, students in the universities and second level schools, trade unions, migrant communities, solidarity movements for refugees, municipal grassroots movements, alltomassively mobilizeso as to make the 17th March a milestone to bring an end to the threat of fascism and to racist policies. Let’s pave the way for a Europe without neo-Nazis and racism!
Read 3243 times
Tweet
Published in 17 Μάρτη μέρα κατά του ρατσισμού και του φασισμού
Tagged under