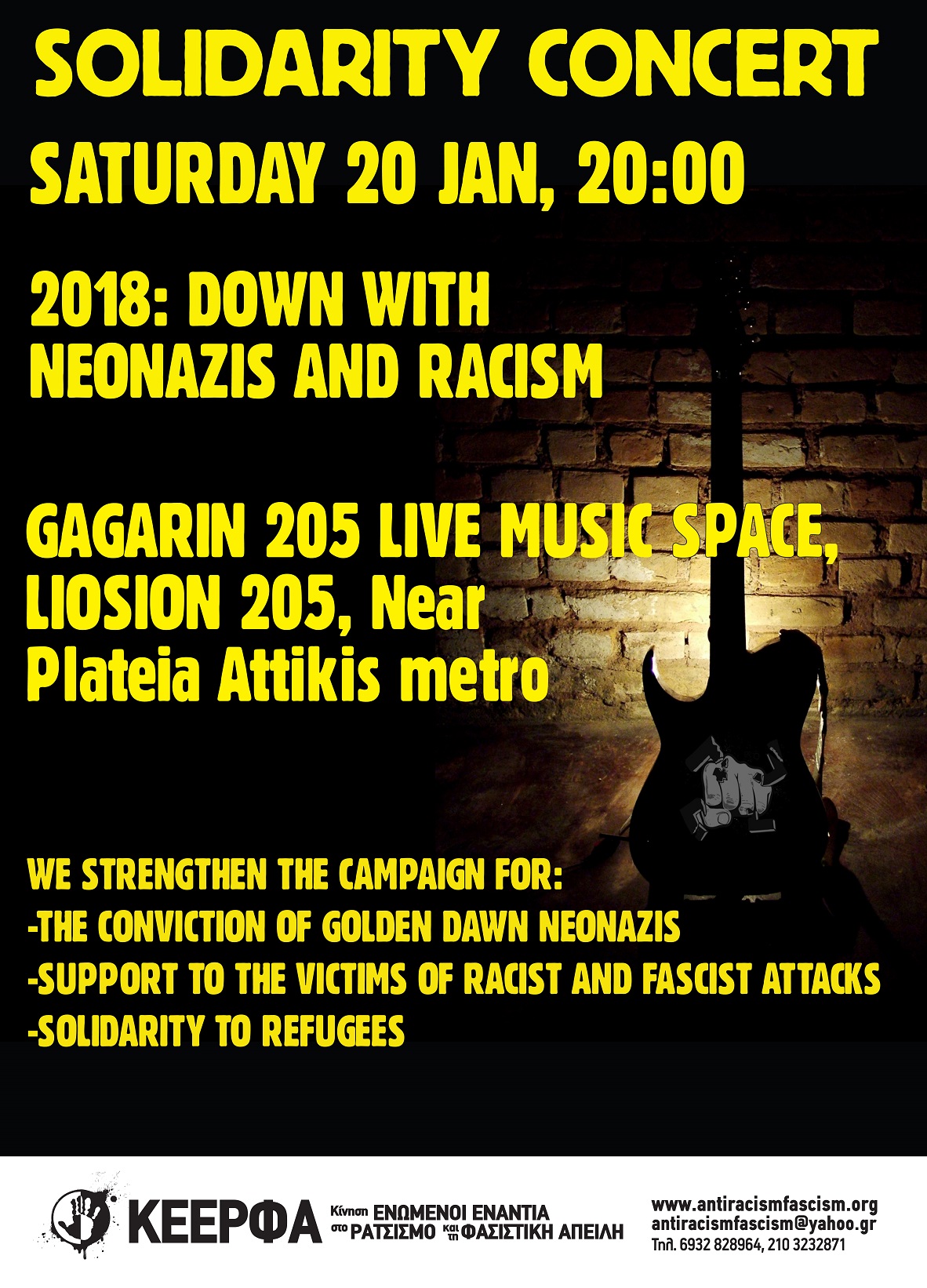 WE STRENGTHEN THE CAMPAIGN FOR:
-THE CONVICTION OF GOLDEN DAWN NEONAZIS
-SUPPORT TO THE VICTIMS OF RACIST AND FASCIST ATTACKS
-SOLIDARITY TO REFUGEES

2018 is a year of big challenges for the antiracist and antifascist movement.
Donald Trump is escalating the threat of war from Afghanistan to Palestine, while at the same time unfolding a racist campaign against Muslims and people of colour in the United States. In Europe, the politics of refugee concentration camps, Fortress-Europe and the closed borders that have drowned thousands in the Mediterranean and created the slave markets in Libya, are strengthening the advance of the alt-right.
In Greece, Mouzalas is continuing to implement the EU-Turkey deal, thus making Moria camp a symbol of inhuman treatment for refugees, with their lives exposed to danger and severe cold. These policies open up the way for the alt-right and Golden Dawn, while Nea Democratia is attempting to recruit the municipal majors of the islands in a racist agenda against refugees.
However, refugees, migrants and the antifascist movement have given numerous fights throughout the year that passed. Resistance in the camps put pressure to the government to open the cities for the refugees and public schools for their children.
On March 18, international day of action against racism and fascism, thousands of refugees took to the streets. Migrant land workers from Pakistan stood up against fascist attacks in Gorytsa, Aspropyrgos, by massively mobilizing against them. KEERFA stood in solidarity with the victims of the racist attacks in Aspropyrgos. During the same days, Pakistani migrants were striking for 19 days against the boss’s racist threats at the factory K.Georgiou. And they won.
On September 16, action day for the commemoration of Pavlos Fyssas’ murder by the neo-Nazis, thousands of migrants from Pakistan, Bangladesh, Afghanistan marched with the big antifascist rally towards the Golden Dawn Headquarters, demanding that they get shut down, while raising their voices against Myanmar’s Rohingya mass genocide.
In another great gesture of solidarity, the Pakistani Community of Greece ‘Unity’ sent out relief teams to Mandra to help those afflicted by the floods.
Alongside with the African communities, we marched against the slave trades in Libya.
Throughout the year, we have supported the campaign for the conviction of the neo-Nazi Golden Dawn murderers with rallies and constant presence inside the courtroom. As we are entering the year in which the trial will be completed, it is already clear that Golden Dawn is a criminal organisation following hierarchical orders from its leadership.
We invite you be part of and financially support KEERFA campaigns for the conviction of the neo-Nazis, the support to the victims of racist and fascist attacks, solidarity to refugees and the fight for migrants’ rights.
KEERFA is counting on your support as well as the support from unions, collectivities and other movements to stand up against racism and the fascist threat!
Join our solidarity concert in order to strengthen our resistance to racism and fascism; in order for hope to win!
WE ARE ORGANIZING FOR MARCH 17, INTERNATIONAL DAY OF ACTION AGAINST FASCISM AND RACISM!
Donate at ETHNIKI TRAPEZA 167/470832-65, IBAN GR78 0110 1670 0000 1674 7083 265, SWIFT ETHNGRAA